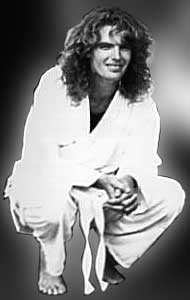 I was the first Webmaster at UC San Diego, back in the early 90s, when I came up with the idea of putting the bands I was recording in my studio on this new thing called the "World Wide Web." We were looking for lots of audio and video ideas to show how this new creature handled sound and vision. So I simply took photos of the musicians, and digitized the recordings (to WAV and AIFF files, MPEG was still at MPEG1 and relatively unknown). I placed the results on the Web server at UCSD, which was one of the first in the US, and around 1992 became "the first music studio on the World Wide Web." At the same time, I started the Harmony Music List, and was watching other music resources slowly convert from Gopher (or PHP or telnet or Usenet groups etc.) to the WWW. Prince's Paisely Park studio appeared as the second studio I could find on the Web about 6 months after I launched MKBmusic.com.
A capella singing group Shakin' Not Stirred was the first group to record at MKBmusic studio, followed by other groups including Her False Hope and Charles Cahill, before I started recording my own groups and music. Many of these first recordings are available on the audio page

Some of the many bands I've been in...

I started playing electric bass while a Senior in High School, a late start. But within a year I was playing in bands. We didn't have a singer, so I would simply yell out where to change, which led to us getting a mic so they could hear my "direction." One day, someone offered us a "gig," and when asked who our singer was they simply said "Michael." So I got the lead singer role "by default." We called ourselves JMR ("Jammer") for our initials, Jeff (guitar), Michael (bass and, apparently, lead vocals) and Rich (drums). Our first gig was at a Vietnamese restaurant, trading sets with their "house band." They absolutely loved anything we did, although we were pretty bad. Shouts of "Lock and Loll!" and requests for "Red Reperrin!" filled the room. The house band was a riot, I will never forget their rendition of "Knock Three Times," complete with heavily accented vocals and completely hilarious stage antics. What a first gig!

During my senior year in high school, I met Jon and Frank, and we started what turned out to be one of the two most in-demand bands for high school keg parties. Another band called "Emerald" played what we considered "softer rock." Armageddon created a list of 60+ 70s and 80s rock songs, and would play from 8PM to 2AM, 6 hours, with only short breaks. Ah to be young and flexible again! I met my future wife while playing a Halloween party, so without this band my kids wouldn't exist.

When I started studying at UC San Diego, I left Armageddon for what I thought was a band with a chance at stardom, The Drive-Ins. They had an "album" (yes, actual vinyl, I still have a copy!), played interesting original music, and seemed to have their act together. Regrettably, after a year or so of gigging, the usual internal socio-political issues took over, and I bailed out.

Reggae was getting really big in the early 80s, so I formed a group called "Ganja" with Dave on drums and Mark on guitar. We played a couple gigs before we came up with the name "Token White Boys," which stuck. I grew the band up to a 6-piece reggae outfit, we played tons of really fun gigs, and recorded my first original music attempts.

As we moved from "roots reggae" to playing more ska and writing more of our own music, I changed the name of the group to Modern Zoo, a reference from a song written by our saxophone player Mike Schutteloffel. Our list contained less and less "cover tunes," until one day we played a gig that ran long, and had to cut a couple songs, and we realized we'd just played our first "all original show." After that, we decided to only do cover tunes when requested, and we recorded a few releases. I shopped them all around the LA music scene, carrying cassettes and sheet music to all the major label reps.

I started doing less live music, and more studio work, so drummer Erick Goldman and I formed a rhythm section we called The Experiment. I played guitar and bass, and wrote quite a bit of my favorite original songs. Erick and I invited in a few bassists and guitarists, and we recorded some really fun stuff. My studio clock got stuck at 20 to 9, so for a bit we called our group that name. I didn't realize until many years later that in the famous book Great Expectations the clocks are stopped at 20 to 9...

One of the best spin-offs of The Experiment was a group Erick and formed with Ralphie Palladino called Subtle. We recorded some very cool stuff, some written by Ralphie, others by me. This group gave Erick and I a chance to stage some of the songs we'd written together.

After Erick got married and moved away, I formed a group with Andy Anderson and Chad Fortin called Goodworld. We had tons of fun, recorded a release, and played quite a few live shows. Andy moved away, and Chad went back to DJ work, although somehow I ended up with his drum kit...